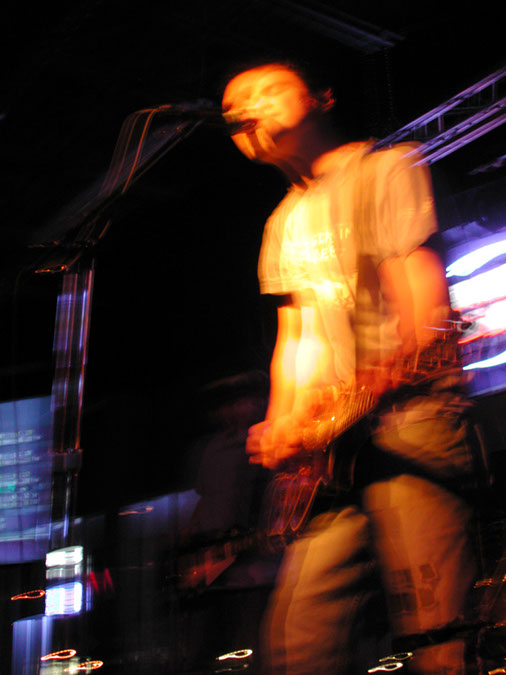 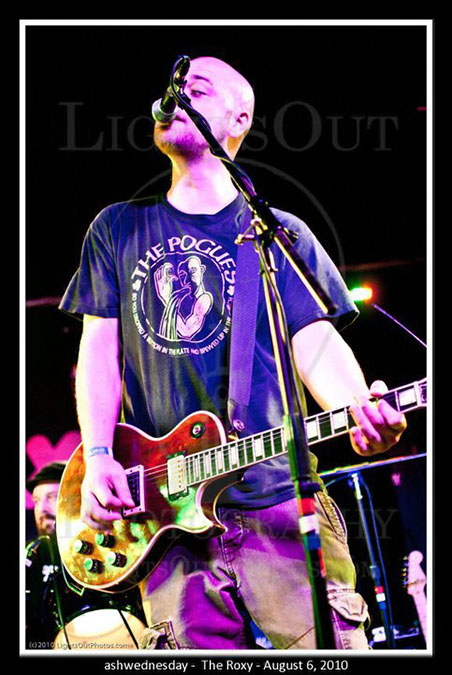 Just a few hours later, I was sitting in a car, tearing my dinner into strips when I spotted my friends. I pulled my stitches when I yelled out to them, and they invited me to come play cards that evening. At eighteen, I was not known for my sound decision-making abilities (not that my reputation in that regard has improved). But at that age, your only currency is the time spent with your friends.

Well, that and actual currency.

Anthony, Brinton, Aaron and I all enjoyed playing cards, but I suspect that they enjoyed it a little more when I made it over; mostly because we enjoyed each other’s company, but partly because I wasn’t very good at it. Any reasonable person would not have went and played poker while still slightly sedated, but time was running out before we were all supposed to go into the world and Make Something of Ourselves. With that in mind, I drove out to the middle of nowhere where I would once again be taken to the cleaners by a trio of sharks. This might seem cruel to do this to someone you call a friend, but I don’t consider it an act of malice. For one thing, it’s not like I was gambling the baby’s milk money away, and for another it wasn’t really about the cards. Like everyone knows, friends find something that they enjoy and use it as a way to get together and be in each other’s company. So, I was more than happy to show up, slur some words through stitched-up jaws, and take my lumps.

Or maybe it was about the cards. Either way, I was going home with less than I brought.

Taking lumps is a fact of life. As long as you’re here, you will take them. Anthony and I gave each other some lumps on purpose as kids. As time smoothes all of our edges away, the reasons why are mostly lost on me now. That was never meant to be our relationship to each other, anyway. But as kids, you don’t have a disagreement, sit down, and say “Well, I do not agree with your position, and I will explain why, and maybe we can come to an understanding.” You just call the other kid “buttface,” and the larger kid winds up sitting on the smaller kid. I’ll leave you to figure which was which. As I’ve said, that kind of relationship could not last, and one of the big reasons for that was being in the band.

I don’t know if I have the words to explain what it meant to be in the band at that time, but here goes: take everything you remember about high school – the friendships, the rivalries, the parents, the hormones – condense it into a small room behind the gym, and add a bearded nut who stalked the bleachers trying to curse under his breath, not knowing that every word was amplified by the metal bleachers he stomped across (please understand that I say “nut” with the sincerest fondness). For a couple of hours each school day, and several hours after that, we would all be obligated to be around each other. We would laugh with each other, yell at each other, play music with each other, and have our bus robbed in Washington with each other. Band was a class, a sanctuary, a vacation, and sometimes a tremendous aggravation. One such aggravation was the summer we were forced to attend “Camp Crescendo,” a place where I assume that when they weren’t torturing us by piping Reveille and Taps through a horrible speaker system, they gathered young children to inform them that Santa Claus was not real. It stunk, it was hot, the cafeteria sucked, and one side of my headphones stopped working. Adding to the misery was a man who was our assistant band director at the time. He played the trumpet and spent time in the military. He was very talented and very serious about what we were doing. So naturally, he rubbed us the wrong way. He demanded respect and would accept nothing less. He also had a dubious hairpiece. And so it came to pass that one day, while barking commands at us, Anthony nonchalantly reached up and snatched his toupee as he walked past. I’ve never seen a face turn that red before or since. Much like Nurse Ratched, his power over us was broken, and soon he was out of our lives.

I’ve been coming back to this for hours, but I really had to take a break after typing that one out. Grief comes in waves, but seeing him in my mind tossing a toupee through the air made me laugh so very hard.

Anthony was always good for a stunt like that. I remember him getting suspended once for something that was pretty innocent, but of course got away from him. There was a hallway in school that if you did it just right, you could sling a quarter up the wall and it would launch into the air like it was shot out of a cannon. If you were lucky, you could catch some fool underclassman unaware and plonk them in the back of the head. Anthony had the misfortune of hitting the absolute perfect attempt, but at a time when a teacher walked into the line of fire. Hearing the excuses that came out of his mouth would put most authors to shame for sheer creativity. She wasn’t buying it. Thinking back on it, we got into trouble quite a bit then. Whenever something went down that required a visit from the principle, Haydon would always call the same three or four names to come up and pay the piper. Anthony and I were always on that list. The looks of bewilderment we would put on never fooled anybody. We always got called to the carpet, from toilet-papering cars to egging Haydon’s house, but it was never the kind of antics that were mean-spirited. We were just friends with a warped sense of humor (We get the joke, why didn’t they get the joke? They never get the joke). Sure, we would still butt heads from time to time, like when he tried to steal my girlfriend or I snuck laxative onto his pizza, but eventually we would get over it and move on. In hindsight, if we had pulled most of the things today that we pulled then, we’d probably all have lenghty, sealed juvenile court records.

I’m flooded with memories, like how we all used to go to David Stegman’s house to spend the night and eat pizza that his father would put way too many onions on. David’s family would welcome us hooligans with open arms. We’d eat pizza, watch movies, and get up in the morning and beat the snot out of each other playing football the next day. There’s just too much to tell than I could ever do justice. Those were some of the best moments of my life, and Anthony was right there for all of it. Recently, I said that one of the tragedies of living long enough is that you have to see the people you love leave, but that was a thought that Old Daylan (or Daylon, or Daylkan, or however you might mess up my name) was supposed to understand. Slightly No Longer Young Daylan wasn’t supposed to face this, and certainly not because of the passing of Equally Slightly No Longer Young Anthony.

One of the best moments of Anthony’s life, and what I still consider his greatest trick, was convincing Ramona to go out with him. This was around our senior year. Ramona was in the color guard. They quickly became inseparable, which is de rigueur as teenagers, but they remained so from then on. Ramona is the perfect foil for someone like Anthony, forceful and with a big, straightforward personality. Perfect to balance a bullshit artist like one of us. Anthony and I had more than one conversation about his relationship, the details of which are none of your business. There were no earth-shattering or scandalous revelations, anyway. It was just talking about the girl he was dating and would eventually marry.

After high school, I went to Lexington and drifted away from home. I stayed somewhat in touch, but not nearly as well as I should have. Eventually I started coming back around, and slid back into old friendships. Anthony was one of those. Can you put a price on a friendship that resumes as if no time has passed after years apart? I certainly cannot. We had all become different people in many ways, but that core of who we were was the same. Anthony and Ramona were still together, they had become parents but it didn’t change them that much. They would invite you over, and welcome you warmly when you arrived. I felt like a king when Anthony or Ramona would yell my name as I walked in, and I never took advantage of that as much as I should have.

I can go through my phone and facebook and there they are, so many invitations to come and join everyone. Sometimes under the guise of playing cards, and sometimes just get-togethers, but there they are: “Come join us and your friends. We miss you.” I missed them, too. And now, I miss him. Anthony had grown into a man with a kind, generous heart. He loved his family, he loved his friends, and you couldn’t help but love him back. Laughter came so easy. Sometimes, flashes of the mischievous Anthony would appear, like when he got caught trying to convince Ramona to fold a hand one night, and his excuse was that he was trying to convince her to bring him some pineapple. I know it doesn’t seem that humorous, but if you were there, you’d understand how it has since taken on the power of legend. There’s just too many things that had us in stitches to try to pluck a few out and list them here. They’re probably dumb, anyway. Always, you were able to see Anthony’s generous side. One night after a long poker game, we had to help push cars out of the driveway because the weather was so bad. As each person left, it started to become clear that the last person to leave would be in trouble. That person was me. I of course got stuck, But Anthony managed to convince his father to come up and drag my car out of the ditch the next morning. I’d go up there every night and get stuck if it would bring him back.

There’s just too much to Anthony himself to try and list here. How can you condense a life to a few paragraphs, especially the life of a man as big as Anthony? The man cast a shadow that surrounds all of his friends. This shadow is caused by the light that Anthony has left for us: his warmth, his humor, and his spirit. This is obvious, especially to those of us who have known him for much longer than we haven’t. In a few days, I will join the rest of his friends to say goodbye to him. If you are with us, please excuse me if I suddenly break into laughter. It’s not that I am being disrespectful. It’s just that stories about Anthony usually end with laughter. I loved the man, and I will love his memory.

For some reason, Anthony often came to be known by Gabbard, or just simply Gab. I’m sure someone else might know why, but to me it’s a mystery. One thing that isn’t a mystery, however, is how he has impacted so many of our lives. I miss my friend, and if there is a place for us after this, I hope he is there waiting to take my money.